Add to quote
This product is already in quote request list
Browse the list
රු210,121.00 for 3 item(s)

For the growing Gigabit network and IoT (Internet of Things) demand, PLANET has launched a new-generation Stackable Gigabit Switch solution, the SGS-5220 switch series, to meet the needs of enterprises, telecoms and campuses for a large-scale network deployment. The SGS-5220-24T2X is Layer 2+ Managed Stackable Gigabit Switch, which supports both IPv4 and IPv6 protocols and hardware Layer 3 static routing capability, and provides 24 10/100/1000Mbps Gigabit Ethernet ports, 4 shared Gigabit SFP slots, 2 10G SFP+ uplink slots and another 2 dedicated 10G SFP+ stacked interfaces for stacking with the series of switches. Up to 16 units, 384 Gigabit Ethernet ports and 32 10Gbps SFP+ slots can be managed by a stacking group and you can add ports and functionality as needed.

The SGS-5220 series applies the advantage of the stacking technology to managing the stack group with one single IP address, which helps network managers to easily manage a stack of switches instead of connecting and setting each unit one by one. The stacking technology also enables the chassis-based switches to be integrated into the SGS-5220 Managed Switch series at an inexpensive cost.

Through its up to 40Gbps, bi-directional high bandwidth tunnel and stacking technology, the SGS-5220-24T2X gives the enterprises, service providers and telecoms flexible control over port density, uplinks and switch stack performance. The stack redundancy of the SGS-5220-24T2X ensures that data integrity is retained even if one switch in the stack fails. You can even hot-swap switches without disrupting the network, which greatly simplifies the tasks of upgrading the LAN for catering to increasing bandwidth demands. 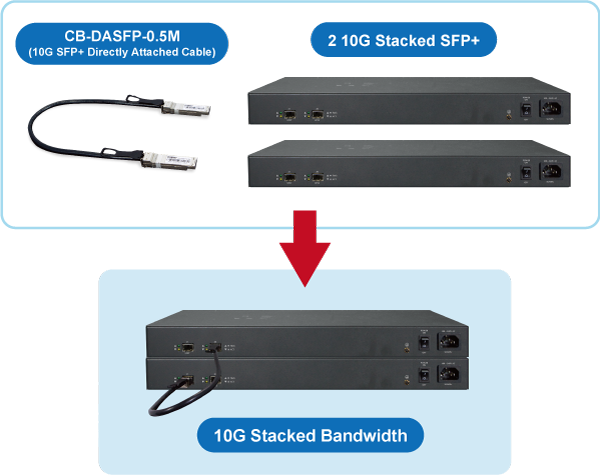 10G Ethernet is a big leap in the evolution of Ethernet. The two 10G SFP+ slot of the SGS-5220-24T2X supports Dual-speed, 10GBase-SR/LR or 1000Base-SX/LX, meaning the administrator now can flexibly choose the suitable SFP/SFP+ transceiver according to the transmission distance or the transmission speed required to extend the network efficiently. They greatly support SMB network to achieve 10Gbps high performance in a cost-effective way because 10GbE interface usually could be available in Layer 3 Switch but Layer 3 Switch could be too expensive to SMBs.

By supporting IPv6 / IPv4 dual stack and plenty of management functions with easy and friendly management interfaces, the SGS-5220 series is the best choice for IP surveillance, VoIP and wireless service providers to connect with the IPv6 network. It also helps the SMB to step in the IPv6 era with the lowest investment but not necessary to replace the network facilities while the ISP constructs the IPv6 FTTx edge network.

To help customers stay on top of their businesses, the SGS-5220 switch series not only provides ultra high transmission performance and excellent layer 2 technologies, but also offers IPv4/IPv6 VLAN routing feature which allows to cross over different VLANs and different IP addresses for the purpose of having a highly secured, flexible management and simpler networking application.

The SGS-5220 series can be programmed for advanced switch management function, such as dynamic port link aggregation, Q-in-Q VLAN, Multiple spanning tree protocol(MSTP), Layer 2/4 QoS, bandwidth control and IGMP/MLD snooping. The SGS-5220 series allows the operation of a high-speed trunk combining multiple ports. It enables up to 14 groups of 8 ports for trunk maximum and supports connection fail-over as well.

The SGS-5220 series offers comprehensive layer2 to layer4 access control list (ACL) for enforcing security to the edge. It can be used to restrict to network access by denying packets based on source and destination IP address, TCP/UDP port number or defined typical network applications. Its protection mechanism also comprises 802.1x Port-based and MAC-based user and device authentication. With the private VLAN function, communication between edge ports can be prevented to ensure user privacy.

Flexible and Extendable Solution
The 4 mini-GBIC SFP slots built in the SGS-5220-24T2X support dual speed as it features 100Base-FX and 1000Base-SX/LX SFP (Small Form-factor Pluggable) fiber-optic modules. Now the administrator can flexibly choose the suitable SFP transceiver according to not only the transmission distance, but also the transmission speed required. The distance can be extended from 550 meters to 2km (multi-mode fiber) and up to above 10/20/30/40/50/70/120 kilometers (single-mode fiber or WDM fiber). They are well suited for applications within the enterprise data centers and distributions.