Add to quote
This product is already in quote request list
Browse the list
රු74,604.00 for 3 item(s)

Easily-deployed and Expanded PoE Network
Designed to be installed in a wall enclosure or simply mounted at any convenient location on a wall, PLANET WGS-804HP is an innovative, wall-mounted industrial 8-port Gigabit Ethernet Switch with 4-port 802.3af/802.3at Power over Ethernet. It comes in a compact but rugged IP30 metal housing. Featuring a total PoE budget of 120 watts, ultra networking speed and operating temperature ranging from -10 to 60 degrees C, the WGS-804HP is an ideal solution to meeting the demand for sufficient PoE power for the following network applications.

The WGS-804HP is able to operate reliably, stably and quietly in any environment without affecting its performance, and provides a quick, safe and easy deployment of PoE PDs with power feeding.

Innovative Wall-mount Installation
The WGS-804HP is specially designed to be installed in a narrow environment, such as wall enclosure or weak electric box. The compact, flat and wall-mounted design fits easily in any space-limited location. It adopts “Front Access” design, making the installing, cable wiring, LED monitoring and maintenance of the WGS-804HP placed in an enclosure very easy for technicians to manage. The WGS-804HP’s fixed wall mounting, magnetic wall mounting or DIN rail installation enables its efficient use of enclosure space, thereby making its usability more flexible. 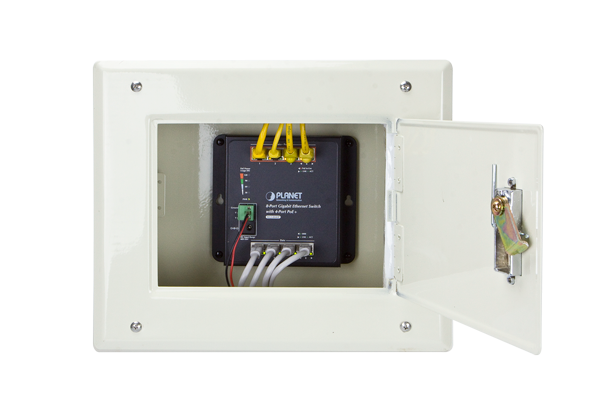 Centralized Power Distribution for Small Ethernet Networking
The WGS-804HP provides four PoE ports that combine up to 120 watts of power output budget for catering to small scale of PoE network applications. Compliant with both IEEE 802.3at and IEEE 802.3af Power over Ethernet standards, each PoE port supplies up to 30 watts of power output and data transmission in Gigabit speed both delivered over one Cat.5e/6 Ethernet cable, powering remote PoE PD at distance up to 100 meters. 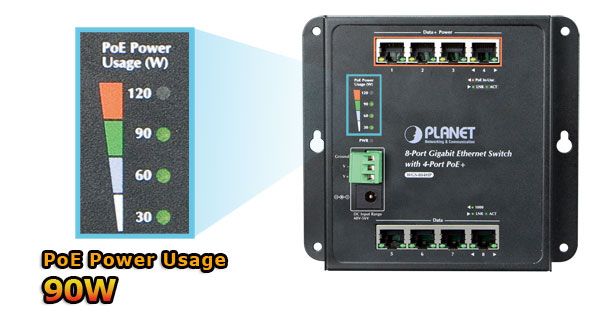 Ready to Power Up IoT
Internet is very popular the world over as users surf online daily with their mobile devices, such as smart phones and tablets, or laptop computers. However, users want more from the Internet, like how to use their mobile devices to control something via the Internet, thus making life more convenient. The WGS-804HP is based on such concept to help users implement the Internet of things (IoT) on the PoE network. Home automation is no longer a dream as Gigabit network performance plus power over Ethernet can easily drive IoT equipment, making it a smart home.

Quick, Safe and Easy PoE Network Deployment
Carrying both Ethernet data and power simultaneously, the WGS-804HP reduces cabling requirements and eliminates the need for dedicated electrical outlets on the wall, ceiling or any unreachable place. It helps users to utilize just one Ethernet cable to install and deploy IP camera, wireless AP or VoIP phone more efficiently and cost-effectively.