Add to quote
This product is already in quote request list
Browse the list
රු58,046.00 for 3 item(s)

PLANET’s newly-revised FGSD-1008HPS Layer 2 PoE+ Managed Switch is designed for enterprises and industries where a network of PDs can be centrally managed. The Switch’s management functions have been enhanced to include intelligent PoE management, IPv6 management, ACL, GVRP, and more.

Cost-optimized Managed PoE+ Switch with L2/L4 Switching and Security
PLANET FGSD-1008HPS is an ideal Managed PoE+ Switch which provides cost-effective advantage to local area network and is widely accepted in the SMB office network. It offers intelligent Layer 2 data packet switching and management functions, friendly web user interface and stable operation. The model complies with IEEE 802.3at Power over Ethernet Plus (PoE+) at an affordable price; the FGSD-1008HPS is equipped with 8 10/100BASE-TX Fast Ethernet ports and 2 Gigabit TP/SFP combo interfaces with inner power system. With its 8 Fast Ethernet ports integrated with 802.3at PoE+ injector function and total power budget of up to 125 watts, it offers a rack-mountable, affordable, safe and reliable power solution for SMBs deploying Power over Ethernet networks, or requiring enhanced data security and network traffic management.

Solution for IPv6 Networking
With the support for IPv6/IPv4 protocol, and easy and friendly management interfaces, the FGSD-1008HPS is the ideal choice for IP surveillance, VoIP and wireless service providers to connect with the IPv6 network. It also helps SMBs to step in the IPv6 era with the lowest investment and without having to replace the network facilities even though ISPs establish the IPv6 FTTx edge network. 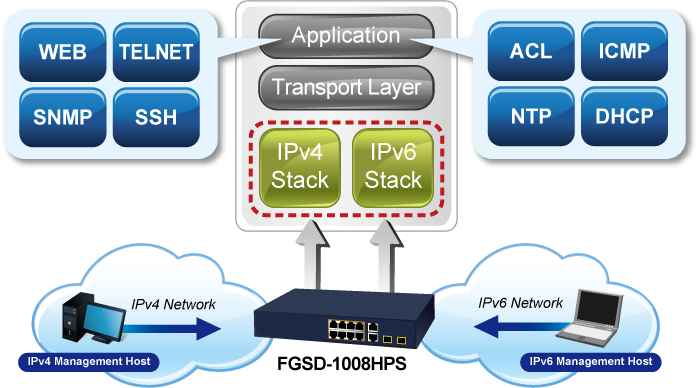 Intelligent Powered Device Alive Check
The FGSD-1008HPS can be configured to monitor a connected PD status in real time via ping action. Once the PD stops working and it is without response, the FGSD-1008HPS will resume the PoE port power and bring the PD back to work. It will greatly enhance the network reliability through the PoE port resetting the PD’s power source, thus reducing administrator management burden.

PoE Schedule for Energy Saving
Besides being used for IP surveillance, the FGSD-1008HPS is certainly applicable to build any PoE network including VoIP and wireless LAN. Under the trend of energy saving worldwide and contributing to the environmental protection on the Earth, the FGSD-1008HPS can effectively control the power supply besides its capability of giving high watts power. The “PoE schedule” function helps you to enable or disable PoE power feeding for each PoE port during specified time intervals and it is a powerful function to help SMBs and enterprises save energy and budget. 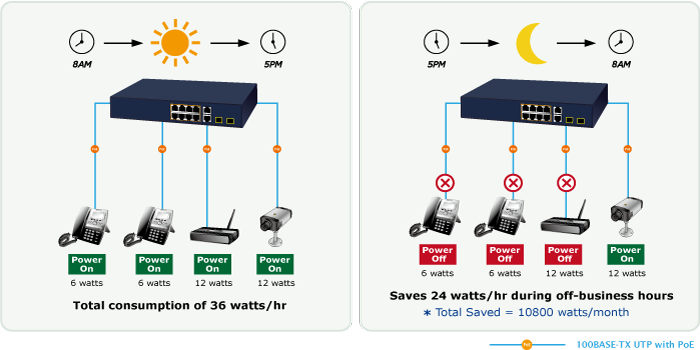 Enhanced Security and Traffic Control
The FGSD-1008HPS offers the comprehensive Layer 2 to Layer 4 access control list (ACL) for enforcing security to the edge. It can be used to restrict network access by denying packets based on source and destination IP/MAC address or defined typical network applications. The FGSD-1008HPS also provides DHCP Snooping, ARP Inspection and MAC Verification functions to prevent IP snooping from attack and discard ARP packets with invalid MAC address. Also included are per port MAC/IP address binding and MAC address binding.  The network administrator can now build highly-secure corporate networks with considerably less time and effort than before.

Cybersecurity Network Solution to Minimize Security Risks
The cybersecurity features that virtually need no effort and cost to have included the protection of the switch management and the enhanced security of the mission-critical network. Both SSH and SSL protocols are utilized to provide strong protection against advanced threats. The network administrator can now construct highly-secure corporate networks with considerably less time and effort than before.

Flexible and Extendable Uplink Solution
The FGSD-1008HPS provides 2 extra Gigabit TP/SFP combo interfaces supporting 10/100/1000BASE-T RJ45 copper to connect with surveillance network devices such as NVR, Video Streaming Server or NAS to facilitate surveillance management. Or through these fiber SFP slots occupied by the 1000BASE-SX/LX SFP (small form-factor pluggable) fiber transceivers, it can be uplinked to a backbone switch and monitoring center in long distance. The distance can be extended from 550 meters to 2km (multi-mode fiber) to 10/20/40/80/120 kilometers (single-mode fiber or WDM fiber). They are well-suited for applications within the industrial data centers and distributions.